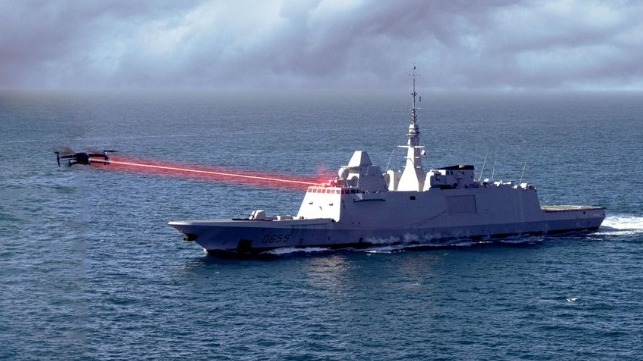 After the United States Navy began using a laser-based anti-drone system for point defense, the French Navy is about to begin testing a similar system, as they see it as a possible replacement for explosive-laden drones and small craft that would offer a new level of security for their maritime assets.

A drone armed or loaded with explosives is ubiquitous in modern warfare, and surface-borne drones have been implicated in connection with the ongoing Yemeni Civil War. To address these threats, a French defense firm, CILAS, has devised a strategy. With HELMA-laser P’s tracking platform, the system can follow drones in flight and then use a modest two-kilowatt laser to bring them down.

Over the past year, CILAS has used the laser weapon on drones to target threats in France, and it has reportedly taken down nearly 3 dozen of those drones. Minister of Defense Florence Parly announced that following the end of the trials on July 7, the system was ready for a trial on a French Navy vessel.

Neither the name of the vessel or the make of the ship were announced in connection with the first trial.

Any cookies that may not be particularly necessary for the website to function and is used specifically to collect user personal data via analytics, ads, other embedded contents are termed as non-necessary cookies. It is mandatory to procure user consent prior to running these cookies on your website.